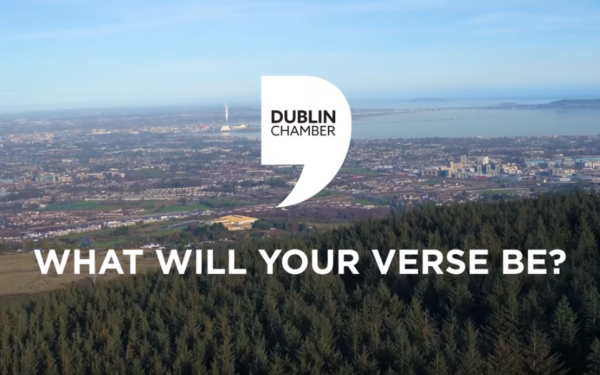 Dublin Chamber wanted to address the issues that regional Ireland had with Dublin, as well as to get a national conversation going. The aim of the project was to dissolve animosity towards the capitol through satire while gently reminding people that Ireland as a whole is connected.

Verve created a cinematic video piece, casting Love/Hate actor, Peter Coonan to narrate a poem wrote by local spoken word poet, Lewis Kenny. The aim of the video was to get people thinking about the future and the type of Ireland that they want to live and work in, with the end line asking the audience ‘what will your verse be?’. The output was a dramatic, emotional and ambient piece shown on a 130SqM LCD screen at Dublin Chambers annual dinner in the Convention Centre Dublin.

Verve created a 2.30 minute comedy video personifying the counties of Ireland and used their interaction to casually tackle the issues between Dublin and the rest of the country. Verve developed the script, sourced the actors and location and took control of the final edit output. We then ran a 2 week social media campaign on Dublin Chamber’s Facebook and LinkedIn channels and also promoted it through a media partnership with Joe.ie.

The comedy video gained over 114k views on Facebook, with over 50k people watching over 10 seconds. The original post reached an audience of 157k. The Atmospheric video received an over-whelming response among attendees at the AGM dinner and online.